2008 Energy Law Update and Look Ahead

As we outlined in December, in 2008 Michigan passed the Clean, Renewable, and Efficient Energy Act (Public Act 295) by strong bipartisan majorities in the legislature. Included in this law was a mandate that 10 percent of electric sales in our state be from renewable sources by 2015 (aka, the “renewable energy standard”).

Well, it’s 2015 now—so it’s a pretty good time to ask how far along Michigan energy providers are in meeting this target.

In our December post, we mentioned that, by the time we reach the 2015 deadline, Michigan energy producers will have invested nearly $3 billion in renewable energy projects like wind and solar farms. 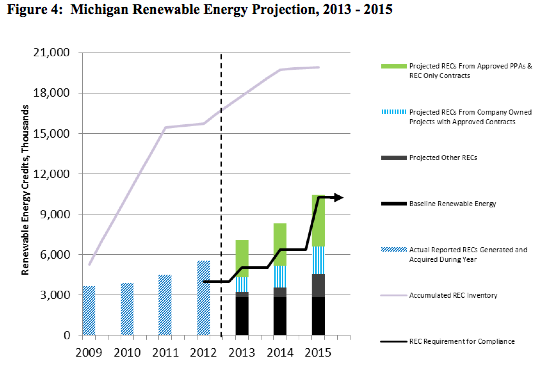 The most recent comprehensive data available from the state on progress toward the renewable energy standard was published in February 2014 and is based on 2012 and 2013 data (click here to view the report).

We will keep our eye out for a new report with more recent data in the coming months and will update you if and when the Public Service Commission publishes the report.

According to the PSC, based “on the number of energy credits generated or acquired during 2012 as reported by electric providers, Michigan’s 2012 estimated renewable energy percentage is 5.4 percent of retail sales.” According to the Michigan Policy Network, the percentage jumped to 6.9 percent by the end of 2013.

This “increase in expected renewable energy generation in 2015 is largely due to the accelerated development of several wind projects.”

Every Project a Piece of the Puzzle

Overall, as of January 2014, “56 renewable contracts and amendments have been approved” by the Public Service Commission. Recently, for example, Consumers Energy opened its Cross Winds Energy Park, a 111-megawatt facility that houses 62 wind turbine generators in Akron and Columbia. Cross Winds became operational on December 12, 2014.

One complicating factor we are watching closely is the impact of the U.S. Environmental Protection Agency’s (EPA) 2014 “Clean Power Plan” (see our previous reports in June and August), which require power generators across the country to reduce carbon emissions by 30 percent by 2030. Currently, Michigan is developing a plan to meet these goals (plans must be submitted to the EPA by June 2016).

There is no way to tell exactly what the collective impact of these two factors—the state’s 10 percent 2015 renewables mandate and the federal 2030 30 percent carbon reduction—will be.

AMP will continue to support policies to meet the 10 percent standard and monitor progress made by Michigan energy producers towards meeting the state deadline. At the same time, we will also closely monitor strategies for meeting the 2030 federal standards and how the two policies are shaping the legislature’s efforts to develop a new comprehensive energy law for Michigan.

As always, we will strive to keep you informed as events progress in what is sure to be a big year in Michigan energy news.